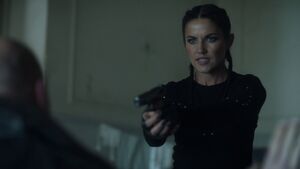 Martyna "Tina" Marek was a character in Whiskey Cavalier.

Described as "a sexy, tough-as-nails mercenary who collides with Team Whiskey during a harrowing mission in Eastern Europe. Her arrival fuels romance, rivalry and shifting allegiances, as this charismatic femme fatal rewrites the rules everyone is playing by."

She got close to Team Whiskey through having a romantic relationship with Standish. However, in the episode "Good Will Hunting" Tina was revealed as the one who killed Emma Davies, the MI6 Agent, suggesting that she may be a spy sent by the Trust to approach Team Whiskey. Her motives remains unknown.