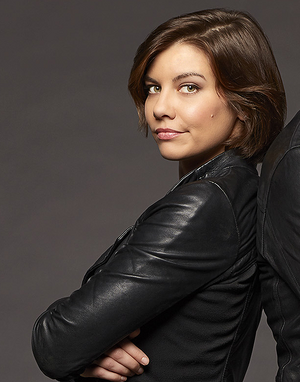 Francesca Trowbridge, also referred to by her nickname Frankie or her codename Fiery Tribune, is a main character set to appear in ABC's Whiskey Cavalier. She is a CIA operative, who is assigned to work with FBI agent Will Chase. "Together, they lead an inter-agency team of spies who periodically save the world (and each other) while navigating the rocky roads of friendship, romance and office politics."

Little is known about Frankie's early life. She did not play golf, tennis, or any other "rich white guy sports" growing up, because she "was too busy being cool and having fun" (Two of a Kind).

Frankie studied abroad, and her parents were killed in a terrorist attack while they were flying out to surprise her (Pilot). She was seventeen at the time of her parents' death (Two of a Kind). According to Susan, Frankie "probably blames herself" and "has a definite fear of intimacy and need for retribution" that likely stem from the attack (Pilot).

Kelly Ashland became Frankie's legal guardian after her parents died, and is described by Frankie as having been good friends with her parents and "like a second mother" to her. Frankie later describes Kelly as "the toughest person [she knows]," and says that she taught her to be tough and not let her emotions get in the way. (Two of a Kind)

Frankie first visited Europe when she was eighteen, during which time she "toured around by bike" (Mrs. and Mr. Trowbridge).

Will mentions that she "skipped college" (Czech Mate), but Frankie says that she hated college while posing as a professor (College Confidential), implying that she spent some amount of time at a university.

Francesca is described as a "badass CIA operative". Lauren Cohan also describes her character as someone with a "really dark edge" and as the "the least emotional character in this group of people".

Will is a FBI agent, who works with Francesca, leading an inter-agency team of spies together.

Edgar starts out as Francesca's target, but later joins her and Will's team of spies.

Jai is Frankie's closest friend and is "the only one [she trusts]" at the start of the series. Frankie tried to kill Jai the first time they met, but claims that this was "wasn't personal" since it was for work (When In Rome). According to Frankie, she "could have killed [him]" but "chose not to," and "still [resents] the fact that [she cares] about [him]" (When In Rome).

" The FBI is a group of buttoned-down boy scouts." ― Francesca to  Will about the FBI.